Or in our case…”The Sooner We Get Out Of This Heat The Better State”!!

Now, don’t get upset if you’re from Oklahoma, or have wonderful friends or family in Oklahoma. I’m sure it can be a great place to live and visit. I’m sure that if we spent time there during a different time of year it would have been much more pleasant, but we didn’t. We went in the middle of July, during a heat wave.  Obviously the heat and the flooding were not anyone’s fault, or even would have been their choice, but it was what it was and that made it a state we looked forward to crossing off our list and leaving for cooler pastures.

We got down to Tulsa, Oklahoma on Tuesday, July 14th. We had called ahead to a Jellystone Campground and made reservations. They informed us that they had just reopened the week before after all of the flooding in the area in the last couple of months. They said that you could go swimming in the lake again at the beach area. Well, when we got there we saw that the beach area was actually still underwater by about 30 feet. There were giant trees out in the water. Campsites were still underwater. The ones that weren’t underwater had been until recently and were still drying out. There were little gnats and bugs that swarmed up from the ground when you walked. There were also lots of spiders (I imagine because of the Thanksgiving dinner in bugs available to them!!!). We were one of only four campers there.   We decided to stay anyway since we were hoping to be gone seeing things most of the time, but it was definitely our least favorite campground yet. 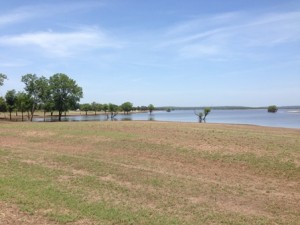 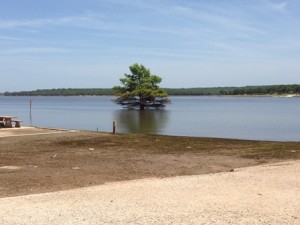 On Wednesday we went to a children’s discovery center that was a lot of fun. Our whole family enjoyed the team activities they had to offer. Human foosball, making big foam bridges and racing on multiple-people, wooden skis. They also had tunnels and slides made out of packing tape that you could climb and slide on. That evening was the highlight of our Oklahoma adventure for me…we got to meet up with my brother, Ben, for dinner. He happened to be in Tulsa for work for a few days. It was great to catch up with him and introduce him to Rosemary. We are very excited to see him again in Colorado when we will be there for his wedding to Kelsey!   We love you guys and are looking forward to your special day! 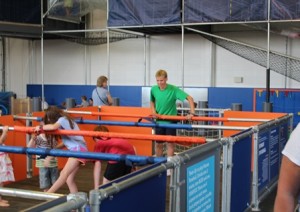 Human foosball at the discovery center in Tulsa 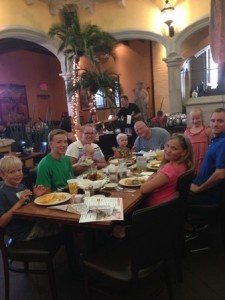 Dinner with my brother, Ben 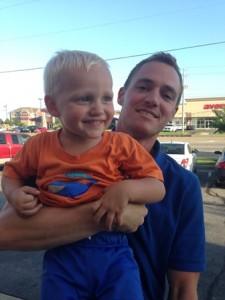 Our camper has air conditioning, but when it’s 100 degrees outside it has a hard time keeping up.   When we left to have dinner with Ben, someone (who shall remain nameless, but felt very bad later!) switched the thermostat to furnace. As we drove back to the camper Lance and I were talking about how nice it would feel to escape the heat when we got back. And then we opened the door. It was warmer INSIDE than it was OUTSIDE!!! Not the best ten minutes of our trip so far as we both had a bit of a meltdown (both figuratively and literally). It was bedtime for the kids and it was SO hot in there.   Well, the good news is that at least it was cooler in there by morning.  After breakfast Ben was coloring and, well, I’ll let you look at the following pictures to see his artwork…. 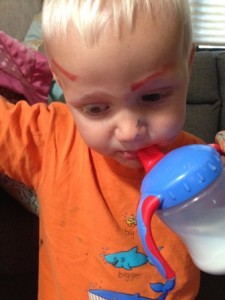 He gave himself new eyebrows… 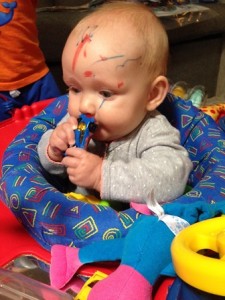 Ok, so I realize I’ve been a little negative about Oklahoma, but I do need to say that the people were very friendly. When we went to the capitol building in Oklahoma City Lance went to find someone to take our picture. The person he asked happened to be the Chief of Staff to the governor. She was very nice and helpful. After she took a couple pictures for us she showed us where to go in the capitol building so we could explore some of that also. We saw the senate chamber, the dome and where the Oklahoma supreme court meets. It was pretty cool and we all really enjoyed that unexpected treat. 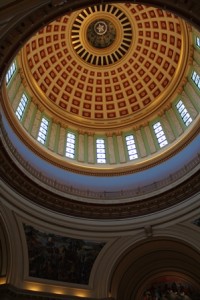 The beautiful dome in the capitol building 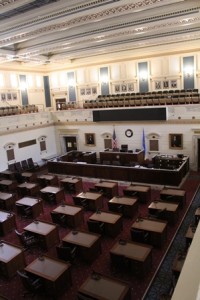 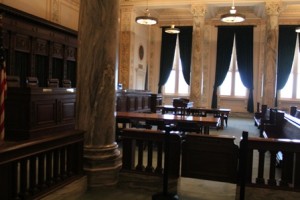 Courtroom of the Oklahoma supreme court 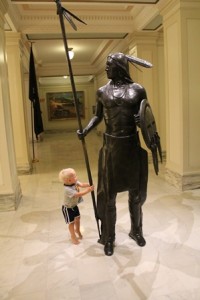 Ben arguing with an Indian over which one of them should get to hold the spear….the Indian won

We stayed in Oklahoma for two nights and the whole family was happy to cross that state line back into Kansas. We have since killed MANY spiders that hitched a ride in our camper (I can only assume they also wanted to escape Oklahoma!).